The Effect of MDMA (Ecstasy) on Cognitive Performance in Drug Recovery 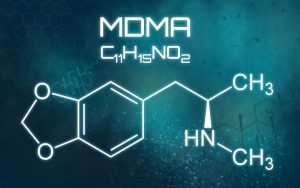 According to previous research, MDMA (3,4-Methylenedioxymethamphetamine), popularly known as Ecstasy, may negatively affect cognition among heavy users. Golding et. al. set out to investigate whether light users and ex-users of MDMA in drug recovery also exhibit deficits in cognitive performance (2007).

The History of MDMA

MDMA has an interesting history. It was first synthesized by a Merck chemist in 1912 and largely forgotten for the next 60 years. MDMA appeared as a street drug in the 1970s after its analogue MDA (3,4-Methylenedioxyamphetamine), known as “the love drug” or “the hug drug” in the 1960s, was criminalized. Andrew Shulgin, a researcher at the University of California, become interested in MDMA after hearing about its unusual effects on students. Shulgin developed a new way to synthesize the drug, and he tried it himself and introduced it to psychotherapist Leo Zeff. Zeff and other psychotherapists used MDMA in their practices for the next several years. The psychedelic drug was said to enhance communication during psychotherapy by reducing the patients’ anxiety and psychological defenses.

Through its effect on the serotonin transporter, MDMA acts as both a serotonin reuptake inhibitor and a serotonin releasing agent. MDMA also acts on the norepinephrine transporter and dopamine transporter and induces the release of norepinephrine and dopamine. The effects of MDMA are believed to be caused, at least in part, by the release of oxytocin, a chemical normally released following natural events like hugging, orgasm, and childbirth and thought to facilitate interpersonal bonding.

The Culture around MDMA

In the 1980s, MDMA became popular as a club drug in nightclubs and at dance parties. Common effects reported by users include a sense of inner peace and well-being, diminished fear and anxiety, euphoria, feelings of empathy and compassion, feelings of introspection and insightfulness, increased energy, increased sexual arousal, and enhancement of the enjoyment of music. Common reported side effects to include paranoia or anxiety, agitation, inability to concentrate, and cognitive and memory impairment. MDMA was legal in the United States until 1985 when it was classified as a Schedule I drug by the Drug Enforcement Administration (DEA).

Heavy use of MDMA can disrupt the balance of neurotransmitters in the brain. Several studies have demonstrated lasting serotonergic changes following MDMA use. Some studies have suggested that long-term MDMA may cause depression or cognitive deficits.

The Potential Benefits of Using MDMA and Cognitive Recovery

To examine cognitive deficits among light users and ex-users of MDMA, Golding et. al. studied 60 subjects, including 20 current light users, 20 ex-users, and 20 non-users. Participants received an extensive battery of cognitive tests. Currently, light users of MDMA had significantly lower overall scores compared to non-users. However, the scores of ex-users were comparable to those of non-users. The researchers concluded the current light users of ecstasy showed a small but significant cognitive impairment, but no such impairment was detectable among ex-users who had not used the drug for at least 6 months. This study is good news for former Ecstasy users in drug recovery. The study suggests that brain chemistry will normalize without any apparent permanent cognitive damage after a period of abstinence.