Heroin is a highly addictive opiate derived from poppies. An inactive drug on its own, once ingested, heroin is converted to morphine by the body. 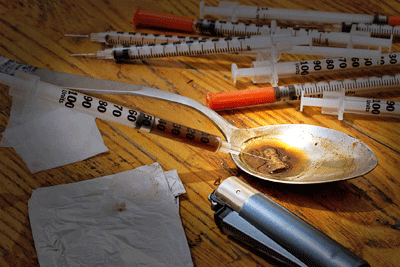 Short-term effects of heroin include:

Long-term effects of heroin may include:

Heroin withdrawal symptoms typically begin 6-12 hours after last use, peaking within 1-3 days and subsiding in about one week.

The Science Behind Heroin

Once heroin is either injected, smoked or snorted, it is converted by the body into morphine. The morphine molecules bind to the opioid receptors located throughout the brain and body, many of which are involved in the perception of pain and reward.

Over time, the body’s response to excess opioids is to make more opioid receptors and decrease opioid production. The user then becomes dependent on the extra opiates in order to function normally.

Treatment for heroin addiction involves both detox and behavioral therapies. Detox may be accompanied by medication to make the withdrawal symptoms more bearable. Possible medications include:

Methadone – A slow acting, opioid agonist that is taken orally. It not only “curbs” the high one feels from heroin but also prevents withdrawal symptoms. While highly effective, methadone itself may be addictive and has a higher chance of overdose when compared to other options.

Buprenorphine – A partial opioid agonist, can be taken sublingually or via transdermal patch, relieving craving without the opiate high. Buprenorphine blocks the effects of heroin, allowing one to taper off the drug. When used correctly, it is unlikely that users get sick or overdose.

Naltrexone – This medication blocks the opioid receptors, and prevents the body’s response to narcotics. Taken by mouth once a day or every other day, it is a good choice for individuals in the beginning or experimental stages of use and for those who are highly motivated to quit. This medication is non-addictive and has minimal side effects.