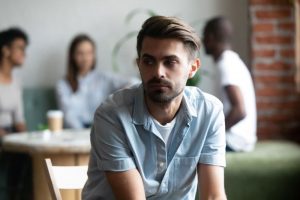 Many studies present evidence that antisocial personality disorder (ASPD) is highly associated with substance use disorders (SUD). The DSM-IV defines ASPD as “a pervasive pattern of disregard for, and violation of, the rights of others that begins in childhood or early adolescence and continues into adulthood.” Characteristics of individuals with ASPD may include persistent lying, superficial charm, lack of remorse, impulsivity, poor behavioral controls, and disregard for social norms and rules. Mariani et. al. examined the rates of different antisocial syndromes among cocaine-dependent and cannabis-dependent individuals seeking drug treatment (2008).

A true diagnosis of ASPD must include the childhood component of antisocial behavior known as conduct disorder (CD). CD refers to a repetitive behavior pattern during childhood in which social norms or the rights of others are violated. Common signs of CD include lying, stealing, truancy, physical aggression, destructive behavior, cruel behavior, and vandalism. After the age of 18, CD may develop into ASPD.

Adult antisocial behavioral syndrome (AABS) refers to antisocial behaviors among adults who did not exhibit CD as children. The 2001-2002 National Epidemiologic Survey on Alcohol and Related Conditions (NESARC), the largest study ever conducted on the co-occurrence of psychiatric disorders among U.S. adults, found that 3.6 percent of adults have been diagnosed with ASPD, 1.1 percent with CD, and more than 12 percent with AABS.

“The strong and significant association between substance abuse or addiction and conditions such as antisocial personality disorder, conduct disorder, and adult antisocial behavior, suggests that prevention and treatment strategies need to apply an integrated approach,” said National Institute on Drug Abuse (NIDA) Director Dr. Nora D. Volkow in regard to the NESARC findings. “By also treating antisocial syndromes, particularly those that develop in adolescence or persist over time, we may be able to substantially reduce substance abuse and addiction.”

Mariani et. al. compared the rates of ASPD, CD, and AABS between cocaine-dependent and cannabis-dependent individuals in drug treatment. A structural interview was conducted with 241 outpatients. The results show that AABS was significantly greater than ASPD among the individuals with SUD in this study. Out of all participants, 30.9 percent had AABS while 17.3 percent had ASPD. A diagnosis of CD only, where CD did not progress to ASPD in adulthood, was rare in this study.

The researchers found no significant differences in the prevalence of AABS between cocaine-dependent and cannabis-dependent individuals. They also found that AABS did not influence addiction treatment retention. This study seems to suggest that while antisocial personality traits might make an individual more likely to use illicit drugs, the use of illicit drugs might make an individual more likely to exhibit antisocial behaviors. Future research should evaluate potential differences between ASPD and AABS as they might apply to drug treatment.