Cannabis Use May Reinstate Alcohol-Seeking Behavior in Recovery 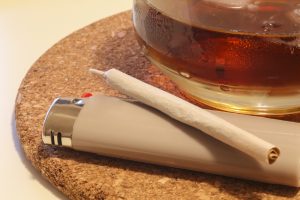 What are the effects of cannabis on alcohol recovery? Many alcohol dependent individuals relapse after a period of abstinence in alcohol recovery. Researchers have used the reinstatement paradigm as an animal model of relapse. Animals are exposed to certain stimuli to test whether they reinstate previously extinguished responses, such as alcohol-seeking behavior. Lab rats, for example, will drink beer to the point of having withdrawal symptoms upon termination. Recent studies have found that synthetic cannabinoids (but not delta-9-THC, the main psychoactive constituent in marijuana) can reinstate previously extinguished drug-seeking behavior in lab rats (for cocaine, heroin, and methamphetamine). Since cannabis is often used with alcohol in social settings, a team of researchers in Australia tested the ability of delta-9-THC to reinstate previously reinforced responding for alcohol and non-alcohol beverages (McGregor et. al., 2005).

You may also be interested in: Drugs Don’t Cause Addiction

In the current study, rats were given free access to beer (4.5 percent ethanol), “near-beer” (with the look and taste of beer but less than 0.5 percent ethanol), or sucrose for 3 weeks. The researchers trained the rats to lick at a tube to self-administer the beverage. Then the researchers administered an extinction procedure so that the licking action no longer produced a reward (beverage). After extinction, the rats were exposed to various stimuli to see whether they reinstated the licking action (reward-seeking behavior).

Results showed that delta-9-THC reinstated responding behavior that was previously reinforced with either beer or near-beer. Since 24-hour food deprivation did not cause reinstatement, the reinstatement was probably not due to increased appetite. Exposure to cat odor (the scent of a predator) also failed to cause reinstatement.

In a second experiment, results showed the drug midazolam, a benzodiazepine, produced modest reinstatement of beer-seeking behavior but did not reinstate sucrose-seeking behavior. Additionally, in this experiment, delta-9-THC also caused reinstated responding for sucrose-trained rats (as well as beer and near-beer trained animals). This suggests that the reinstatement effect may not be specific for alcohol. The authors suggest that “this may perhaps be related to the stressor-like effects of cannabinoids, and their ability to activate key neural circuitry in the amygdala and bed nucleus of the stria terminalis.”

“In conclusion,” the authors report, “the present study provides some intriguing evidence that delta-9-THC is able to increase craving for alcoholic beverages in abstinent animals. However, the effect is non-specific in as much as craving for other non-alcoholic beverages is also affected. Moreover, the exact mechanism underlying the effect may require considerable further study although it almost certainly does not involve a simple cannabinoid modulation of appetite.”

While future research is needed, this study certainly suggests that the effects of cannabis on alcohol recovery are clear. Marijuana use could trigger a relapse, especially if the individual previously used marijuana in conjunction with alcohol.