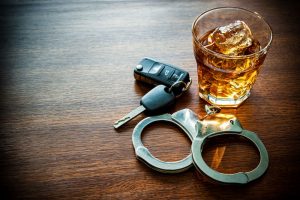 Because alcohol use disorders are common among driving-while-intoxicated (DWI) offenders, a DWI arrest may serve as an opportunity for psychological screening and subsequent alcohol treatment. Holt et. al. examined the Beck Depression Inventory (BDI) as a tool for predicting intervention outcomes in first-time DWI offenders.

The BDI is a multiple-choice self survey consisting of 21 questions. It is the most widely used questionnaire for measuring the severity of depression. Survey questions are related to affective depressive symptoms such as pessimism, guilt, self-dislike, suicidal thoughts, and feelings of worthlessness, as well as physical symptoms such as anhedonia (loss of pleasure), crying, agitation, loss of energy, change in sleep patterns, change in appetite, difficulty concentrating, fatigue, and loss of interest in sex. The BDI is useful for monitoring changes in depressive symptoms over time.

The study followed 284 first-time DWI offenders. Participants were assessed at the beginning and end of a 10-week intervention. They were also assessed at 6-month and 12-month follow-ups.

This study suggests that DWI offenders with symptoms of depression may be prone to develop more severe symptoms of alcohol use disorder, but they may also be more willing to participate in an alcohol recovery program.

Screening tools such as the Beck Depression Inventory might be useful in determining if an individual needs alcohol treatment following a DWI arrest. Screening tools might also help treatment provider decide upon an appropriate therapeutic approach. Individuals who suffer from depression as well as alcohol use disorder may require more intense treatment to address all symptoms. Alcohol recovery will be better supported if we help individuals identify all related problems (such as depression and anxiety), and help them with these problems, not just the alcohol problem.

In this study the individuals who were more depressed had greater drinking problems, as measured by the greater negative drinking consequences they had. This finding supports the idea that denial is not a universal characteristic of drinkers or drug abusers. In this study these depressed drinkers were more motivated (than other individuals with DWIs) to change their drinking. Rather than focus on confronting such individuals we need to find ways to support them as they achieve both alcohol recovery and recovery from depression.