Addiction and Recovery: An Evolutionary Perspective

All species aim to survive. They do so by seeking out some experiences and avoiding or escaping others. The behaviors associated with addiction and recovery can be understood in this larger context of survival, approach and avoidance. The implications of an evolutionary perspective for addiction include new definitions for commonly used addiction terms, and a revised approach to addiction treatment and recovery.

Primary addictive behavior is pleasurable survival behavior. All species engage with the environment in order to survive. Depending on the level of consciousness of the species, the repetitive involvement with these essentials is experienced as pleasurable. Survival essentials include food, sex, and in some mammals attachment (affiliation, bonding, connection, attention from others). In humans and probably many other species, cravings (urges, desires; all in various degrees of intensity) prompt these involvements. Without primary addictive behavior the individual (or species) dies. With respect to attachment in a group-oriented species, to be banished is to die.

With repetition, addictive behavior may become highly resistant to change and become the source of significant problems for the individual. These problems vary according to the specific effects of the substance or activity (e.g., overeating leads to obesity, gambling wastes money, heroin may lead to overdose death, etc.), but they can also be categorized according to the criteria listed in the DSM.

Hunter-gatherer environments presumably have limited quantities of food, sex and attention from others, and no other reliably available substances or activities. In such an environment problematic addictive behavior is unlikely. Apparently problematic addictive behavior arises with civilization (approximately in the last 12K years). In civilization this behavior arises from a (biopsychosocial) combination of biological vulnerability (for the positive effects of the substance/activity), social deprivation or disadvantage (a lack of competing rewards), and psychological vulnerability (difficulty regulating emotions because of adverse childhood experiences, impulsivity, psychiatric disorder, etc.).

Improvement (“recovery”) may be achieved in a variety of ways. Most recovery from problematic addictive behavior occurs without resort to formal support, and hence is termed natural recovery. However, this recovery process may take much time. Services for problematic addictive behavior, which should intentionally duplicate the various processes of natural recovery, may focus on changing biological vulnerability (e.g., with medications), improving social conditions (as suggested by Rat Park) or reducing psychological factors via psychological or psychiatric treatment. Although the popular media emphasizes biological and sometimes psychological factors in addiction and individual efforts to change, social factors may account for the majority of problematic addictive behavior. Social change may be the path to changing the largest number of individuals.

When someone is fully motivated to change, change happens almost instantly and with relatively little effort. In most cases, however, the fundamental challenge to change is ambivalence. Even though the individual no longer wants the negative consequences of the behavior, there is still the belief that “I need this” (just as someone needs adequate food and water). Change occurs as confidence for “doing without” increases and alternative valuable engagements become more satisfying. It can be counterproductive to adopt an addict identity (“I am an addict; I am an alcoholic”). This identity might support the underlying belief that needs to be changed: “I need this” (or “A part of me needs this”). Consequently this identity should not be encouraged (but accepted if it has been adopted).

The Process of Change (Self-Control Versus Environmental Control):

Change is often a back-and-forth and incremental developmental process that can extend over years or decades. Efforts to control this process from outside may work in the short term but typically fail longer term, because of the strong tendency for most individuals to assert their freedom and the extreme difficulty of creating truly substance/activity free environments. The hunter-gatherer environment is presumed to be generally substance/activity free. Self-control was not needed. In the contemporary world, there are no large substance/activity free environments. Military submarines and the international space station are two smaller environments that may actually achieve “drug-free” status. Prisons, although highly managed, do not. Addictive behavior change results from increased self-control, improved management of the personal environment by the individual, and greater involvement in other aspects of life (if available). Because of the wide diversity of humans, the paths to recovery are quite varied, suggesting that although commonalities among paths exist, “as many paths as individuals” is a useful guideline. Recovery can be defined, as DSM defines it, as no more significant problems, regardless of whether use continues.

The term “real recovery” is largely unhelpful if applied to someone else (e.g., “he’s not in real recovery” or “medication assisted treatment is not real recovery”). This term attempts to establish a dichotomy of recovery, when a continuum actually exists. In the highest forms of change the individual no longer engages in any activity that specifically supports change, but rather is fully engaged in a meaningful and purposeful life. At the next lower level there is change-related activity but no significant problems. At even lower levels problems are continuing or diminishing but there is intentional change activity. Individuals in the process of moving up the change continuum may at times congratulate themselves on having achieved a level that they consider “real recovery.” The use of this term in this personal manner may be helpful. 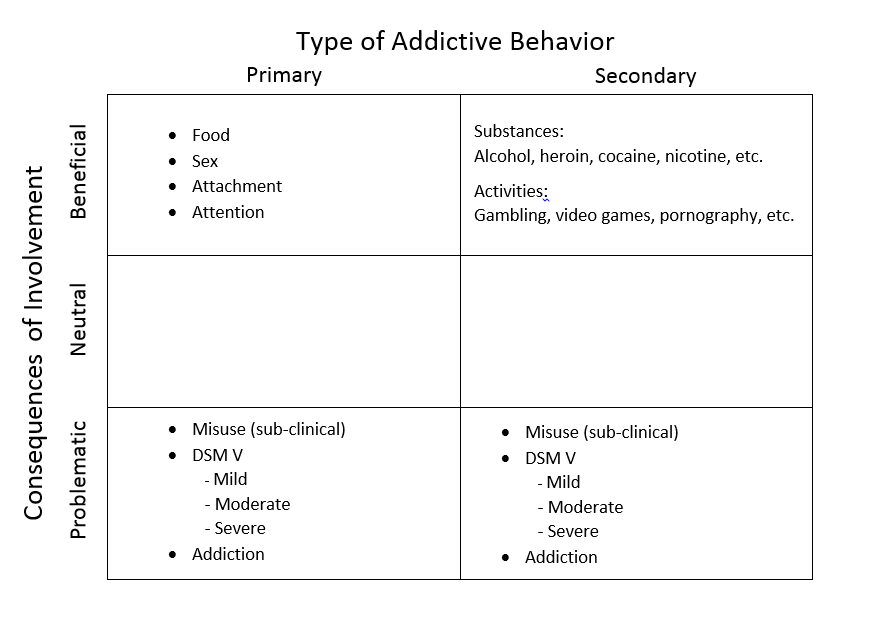 Other candidates for inclusion as primary addictive behaviors are learning and interpersonal power. They are left out of this model because they appear to be not as commonly craved as food, sex and attachment (and other complications). Secondary addictive behaviors can be almost any substance or activity (behavior, process), especially those with a likelihood of significantly impacting emotional experience.

Non-pleasurable survival behaviors (e.g., avoiding or escaping pain) are also critical to survival, but they not craved. Addictive behavior is approach behavior for the sake of reward. Other survival behavior is avoidance or escape behavior for the sake of relief. A compulsion is similar: the compulsive activity brings relief, not pleasure. In substantial addiction the distinction between compulsion and addiction may blur, but it is clear enough at the beginning of the addictive process. For instance, in late heroin addiction the user feels compelled to eliminate craving by using, which is a relief. However, in the early stages of heroin use, craving for the experience of the high was the motivator, not a compulsion to eliminate the craving.

Any addictive behavior is pleasurable and beneficial at first or it would not be continued. People who hate alcohol from the first drink are unlikely to continue drinking and therefore unlikely to progress to problematic drinking.

The DSM-5 establishes diagnostic criteria for only 10 classes of substances, and one activity, gambling. From the perspective of this chart, criteria could also be developed for overeating, maladaptive sexual behavior, maladaptive attachment, and various activities such as internet gaming. Anorexia is an eating disorder that is not included in this account, and is seen here as a kind of compulsion. Bulimia without anorexia is a form of overeating, which is an addictive behavior.

A neutral level of consequences of involvement recognizes that many individuals work to balance the benefits and problems of their use. They “over-do” enough to have some problems, but not enough to undo the benefits. One example is drinking enough on occasion to experience problems, but not enough to dramatically alter life. The definition of “over-doing it” is ultimately connected to the individuals’ deepest values.

The implications of this evolutionary model appear to include the following:
1) continue to promote self-control
2) investigate methods for enhancing environmental control (without substantially impacting personal freedom)
3) stop debating how to define addict, alcoholic and addiction and recognize that not acting on craving is a problem shared by all (if overweight individuals—a majority in the US–came to view themselves as not fundamentally different from those with “drug problems,” because of their own challenges with craving, would not stigma fade dramatically?)
4) continue to increase the diversity of treatment and recovery options