What is Considered Binge Drinking? (Hint: It’s Not Just a College Fad) 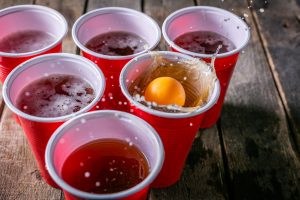 The term ‘binge-drinking’ generally conjures up images of frat boys in pastel polos guzzling litres of PBR out of a homemade beer bong, or something along those lines.  The stereotype is that binge-drinking is a college thing, not a mature adult thing. The truth, according to the current dean at USC’s School of Social Work, is that binge-drinking is on the rise amongst adults in their 40’s, 50’s, and 60’s.  A 2017 survey conducted by the Center for Behavioral Health Statistics and Quality found that over 30% percent of men 26 years or older binge drink, and under 40% of men ages 18-25 binge drink – a difference in percentages pretty close to the margin of error in many surveys.  Based on recent findings, the stereotypical binge drinker may be about as likely to look like our co-worker as our nephew pledging to Sigma Chi.

What is considered binge-drinking?

It is also critical to point out that binge-drinking by itself does not constitute an alcohol use disorder.  Just because someone you know binge drinks regularly does not mean s/he ‘has a problem.’  Binge-drinking is considered risky drinking but is not necessarily problematic drinking, and it is certainly not alcoholism.  Drinking related problems are statistically more likely to occur when people binge drink. Given that alcohol, and all substances for that matter, aren’t going anywhere in human existence it is wise to not only understand what constitutes binge-drinking, but also how to minimize the risks associated with binge-drinking.

As is the case with all substances, the dose is the poison and the safest bet is to never partake.  However, substance use is and always has been an integral part of human existence. It is refreshing to see USC posting credible information on binge-drinking and how to minimize risk and reduce harm rather than adopting the stale bromides fancied by proponents of the delusion of a drug-free society.  People are not going to ‘just say no’ to substances.  Helping people who dare to explore their consciousness do so in ways that increase the likelihood of enjoyable experiences and minimize risk seems like common sense. But, so the saying goes, common sense is not so common.