Book Review: Too Much of a Good Thing…

Too Much of a Good Thing: How Four Key Survival Traits Are Now Killing Us

A review by Tom Horvath, PhD 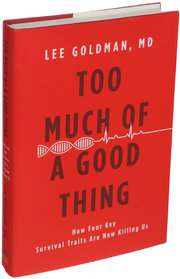 This book is packed with well-referenced scientific information to support the author’s suggestion that hunger, thirst and desire for salt, fear and anxiety, and ease of blood clotting, all originally crucial to human survival, have in the modern era turned against us and become significant causes of illness and death. Of course he is not proposing we give up any of these abilities and behaviors. However, unless we take more control of how they operate, or ameliorate their effects, we will increasingly suffer from them.

The author is dean of the faculties of health sciences and medicine at Columbia University Medical Center, the author of 450 scientific publications, and the lead editor for the last five editions of the Cecil Textbook of Medicine (recently renamed the Goldman-Cecil Textbook of Medicine), “the longest continuously published text in the United States.” It is sold worldwide in six translations.  Dr. Goldman writes with an impressive command of the subject matter of this book. One imagines that he quite carefully reads the ongoing updates of the chapters in his Textbook of Medicine. He cites nearly three dozen of these chapters in the bibliography. There are 42 pages of notes listing the scientific literature on which the book is based, and an additional three-page bibliography of general resources on the broad topic of understanding current human behavior and medical problems in the light of evolution.

In an introductory chapter he reviews the basics of evolution. In the next four chapters he reviews each of these survival traits, presenting in detail how they helped us then and how they are hurting us now.

Chapter 2, “Hunger, Food and the Modern Epidemics of Obesity and Diabetes,” reports that excessive and unhealthy eating has led in the US to one third of the population being obese, another third overweight, and about 10% having diabetes. In the hunter-gatherer world eating as much as one could as often as one could was highly adaptive, and prepared us for times of food shortage. However, the food supply now is dramatically different than in the Paleolithic era (prior to 12,000 years ago).

Chapter 3, “Water, Salt and the Modern Epidemic of High Blood Pressure,” reviews how thirst and craving for salt allowed our ancestors to become great distance runners, sweating as needed to keep from over-heating, yet not becoming dehydrated. Excess salt (often in processed foods) leads to high blood pressure, which in the US is present in about 50% of those ages 55-64, 65% ages 65-74, and more than 70% age 75 and up. High blood pressure is a contributor to about half of heart attacks and strokes.

Chapter 4, “Danger, Memory, Fear, and the Modern Epidemics of Anxiety and Depression,” suggests that even though the world is dramatically safer than previously (which is not to say major improvement cannot still occur), our hyper-vigilance and other fear-driven survival mechanisms are now causing more harm than good.

Chapter 5, “Bleeding, Clotting and the Modern Epidemics of Heart Disease and Stroke,” suggests that bleeding to death was once a major survival concern. The ability to clot rapidly protected anyone who was injured and women during childbirth. Now clots cause many more deaths from heart disease and stroke than they save.

The next three chapters address the question of how to resolve these problems. Might our genes change fast enough? Could we change our behavior? What interventions might the field of medicine provide? I was drawn to this book after hearing an NPR interview with the author. I have often suggested that food can be as addictive as the commonly identified addictive substances. I was curious to see how Dr. Goldman addressed the issue of addiction.

After explaining why genes evolve so slowly, he states in the closing two sentences of Chapter 6 (“Can Our Genes Evolve Fast Enough to Solve Our Problems”):

If we’re going to blunt or reverse the traits that make us eat more than we need, crave salt, get too anxious and depressed, and clot too much, we can’t count on our bodies to do it for us naturally. Instead, we’ll either have to find ways to change our behavior—mind over matter—or we’ll have to rely on science and medicine to help us (p. 217).

The problem with this last statement will become clearer when we look at the final paragraph of Chapter 7 (“Changing Our Behavior”):

Please don’t misunderstand me. We all should try to do better. But when we can’t, we shouldn’t focus on guilt and blame. Instead, let’s look forward to a new era in which we can and should use our brains to change our physiology, just as we used them to create the industrial age and the information age (p. 247).

However, there is a science of behavior change. Our brains built it also. In fact, we may know enough now to make major population changes for all these issues (except clotting, which appears to have a minimal behavioral component). Consider cigarette smoking, which has been dramatically reduced in the US over the last 50 years, based on a range of public health campaigns. The political will to deal with Big Food has been much weaker than the will to deal with Big Tobacco. I expect in time, however, that Big Food will be adequately regulated.  There are also many improvements we could make in providing education (in schools and elsewhere) based on well-established scientific findings about thoughts and beliefs, emotions and moods, craving and desires, and behavior.

I believe that Dr. Goldman makes the crucial error of suggesting that we “can’t” change these behaviors rather than simply stating that we “do not” change them. Fortunately, regardless of whether adequate public health measures about food or widespread and sophisticated psychological education ever occur, effective and sufficient self-management is within the reach of any motivated individual.

Although I disagree with the underlying perspective that we should have low expectations about how behavioral science could address the mismatch between these four survival traits and the modern environment, I recommend this book for the thoroughness and clarity of the information presented. Dr. Goldman builds a strong case for these four mismatches and their costs. How to resolve the mismatches is a separate question. His final chapter (“Changing Our Biology”), on what medicine can do now (a little) and might do later (based on recent promising findings), is exciting. However, we don’t need to wait for medical developments in order to change our problematic behaviors now.