Psilocybin: The Magic in the Mushroom 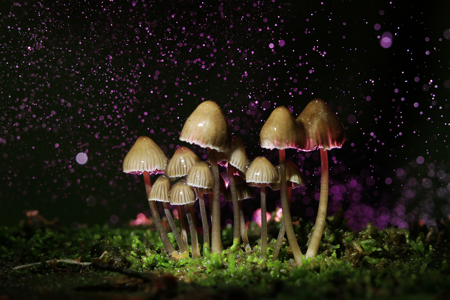 Empirical research supporting the therapeutic benefits of psilocybin (the psychoactive compound in “magic mushrooms”) just keeps piling up.  The idea of mushroom therapy for addiction treatment may sound like a pipe dream espoused by someone named Moonbeam on hippie-hill in Golden Gate Park who smells like patchouli.  But the truth is that psilocybin research from renowned institutions like UCLA, Johns Hopkins, and NYU shows promising results for the treatment of ailments like treatment-resistant depression, OCD, anxiety, and addiction.  In the words of the June, 2017 edition of Psychology Today, psilocybin may be “A One Hit Cure for Addiction.” Cave paintings that are many thousands of years old depict mushrooms, suggesting that psilocybin’s relationship with humanity extends deep into our history.  In recent years, psilocybin’s potential to treat various ailments experienced a surge of enthusiasm in response to strong research findings.  Roland Griffiths, who leads the Johns Hopkins psilocybin research project, describes the findings of psilocybin research as “very promising… quite remarkable… and unprecedented in the field of psychiatry.”

In a study of cigarette smokers seeking abstinence, psilocybin treatment resulted in an 80% abstinence rate six months after the treatment.  Compared to the general six-month smoking cessation rates of 15-30% obtained by current treatment modalities, psilocybin’s initial results suggest that it may be significantly more effective than the addiction treatment currently available. Psilocybin’s potential to effectively treat addiction is further supported by a study published in the Journal of Psychopharmacology.  The study was conducted by researchers affiliated with Harvard Medical School and Boston University, and it reported that psychedelic substances had a protective effect on addiction to opioids. More psilocybin trials for treating substance use problems are currently underway.  The University of New Mexico is currently researching psilocybin for treating alcohol use problems and the University of Alabama-Birmingham is investigating the use of psilocybin to treat problems with cocaine.

You May also be interested in: Ketamine-Assisted Therapy for Addiction

When one begins to dig into why psilocybin produces such “remarkable” and “unprecedented” treatment outcomes the topic gets even more interesting.  In one of the most important recent studies of psilocybin, Griffiths and his team at Johns Hopkins found that psilocybin can, and often does, occasion mystic-type experiences.  The mystic-type experiences occasioned by psilocybin are a major factor in why a single exposure to psilocybin often produces substantial and enduring anti-depressant, anxiolytic, and anti-addictive effects.  Eighty percent of the participants in Griffiths’ study rated their experience with psilocybin as one of the top five most meaningful experiences of their lives.  The spiritual transformation called for by A.A. and similar approaches may be something that psychedelics like psilocybin can help induce.  Bill Wilson himself advocated for the use of LSD to figure into A.A.’s program, believing that it could induce the kind of revelatory experience that helped him recover.

Physiologically, functional magnetic resonance imaging (fMRI) studies also offer further fascinating information into why psychedelics like psilocybin produce “very promising results.”  Studies with fMRI show that the states of consciousness induced by psychedelics like psilocybin are nearly identical to the states of consciousness achieved by accomplished meditators.  Mindfulness-based relapse prevention is an area in addiction treatment that is rapidly expanding with increasing empirical support.  In addition to producing states of consciousness similar to meditation and mindfulness, the University of South Florida found that psilocybin stimulates neurogenesis, or new brain cell growth.  Psychedelics like psilocybin may stimulate the very brain growth necessary for learning and change. Not only are psilocybin research study results fascinating, remarkable, and unprecedented, the annual global drug survey found magic mushrooms to be the safest of all recreational drugs.  The risk of addiction to psilocybin (and psychedelics in general), is minimal.  A rapidly growing body of empirical research suggests that psilocybin may be a method of treating addiction and many of the common issues that underlie self-destructive behavior.  While it may seem like a stoner dream now, psilocybin is poised to be an integral part of the journey to mental and behavioral health within the next few decades.

If you or someone you love are in need of addiction treatment, give us a call. We can help!