Mushroom Therapy Sublingual Strips: A Trip on a Strip 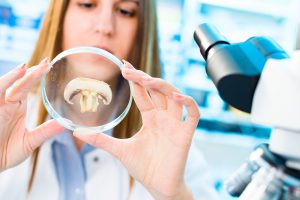 Few things scare big pharma like effective medicines people don’t have to take every day.  Many are familiar with the sardonic notion that there is no money in the cure.  The psychedelic treatment renaissance is arguably the biggest existential threat to big pharma’s decades-long chokehold on America’s addiction to psychotropic medications.  Patents on naturally occurring alkaloids are not permitted in the U.S., so for those looking to capitalize on the resurgence of effective plant medicines creative strategies must be employed.  Enter psilocybin sublingual strips.  A Toronto based company recently announced its efforts to develop a patentable delivery mechanism for the psychoactive compounds in magic mushrooms, namely, psilocybin and psilocyn.  Administering mushroom therapy via sublingual strips may lead to a long-awaited, much-needed marriage of profiteers and effective, lasting treatment.

The emergence of mushroom therapy sublingual strips is yet another earmark on the journey of psychedelic medicines back to a place of prominence in human society.  Psychedelic compounds are interwoven in the fabric of human history.  Nearly all spiritual and religious practices throughout human history involved psychedelics.  Some scientists argue that psychedelics played a prominent role in the evolution of human consciousness.  Studies show that psilocybin stimulates new brain cell growth and reliably induces some of the most profound and important experiences in people’s lives.  It was not until psychedelics posed a threat to religious power structures, due to their ability to reliably deliver profound mystical experiences, that they became a problem.

The development of sublingual psychedelic products is an unequivocal sign of the imminent return of psychedelics to prominence in human medicinal healing practices.  Sublingual psilocybin strips will allow for precise and reliable dosing compared to the variable potency of organic fungi.  Due to 100% bioavailability, sublingual strips also allow for lower dosing to deliver the same intensity of experience, which increases the safety of a compound already shown to have a far better safety profile than the demonizing propaganda efforts of the 20th century against psychedelics would lead one to believe.

Sparce advancements in psychiatric medications since prozac set the stage for the psychedelic renaissance currently underway.  Not only are psychedelics consistently shown to be safe in clinical settings, they are also medicines that people do not take every day.  For some, the thought of achieving lasting results with a safe medication that one rarely ingests compared to tepid results from medications with unpleasant side-effects that must be taken daily is appealing.  While there are some naysayers about profiteers entering into the world of psychedelic treatment, the notion of purely altruistic intention is credulous at best.  The advent of mushroom therapy sublingual strips could streamline dosing and increase access to effective treatment even if it funnels cash up to people who need it the least.