WHO Report on Global Suicide 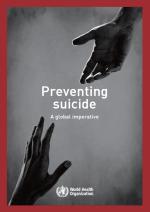 In recognition of World Suicide Prevention Day on September 10, the World Health Organization (WHO) recently released a report titled “Preventing Suicide: A Global Imperative.” While knowledge about suicide has been steadily increasing, it is still a major problem around the globe, with more than 800,000 people dying by suicide each year. Here are some of the key points outlined in the WHO report:

Suicide is a serious problem.
Approximately every 40 seconds, somebody dies by suicide. Among young adults between 15 and 29 years of age, suicide accounts for 8.5% of all deaths and is ranked as the second leading cause of death. Among those aged 30-49, it is the fifth leading cause of death. Suicide accounts for 50% of all violent deaths in men and 71% in women. Despite increased understanding of what leads to suicidal behavior, it remains a serious public health issue.

Suicide is a complex phenomenon, influenced by a wide variety of factors.
At an individual level, risk factors associated with suicide include hopelessness, presence of a mental health disorder, chronic pain, job loss, family history of suicide, and previous suicide attempts. Societal factors also play a role. For example, lack of access to healthcare services and a stigma against suicide can prevent people from getting help and can therefore increase the risk of suicide. War, natural disaster, and discrimination are additional factors that influence the suicide rate. Inappropriate media reporting is yet another contributory factor; when news outlets sensationalize and glamorize suicide, the risk of “copycat” suicides increases.

Suicide is preventable.
Managing mental health disorders is a crucial component of suicide prevention. This can be done by providing access to mental health services and properly assessing for depression and problematic alcohol use. Identifying populations that are particularly vulnerable is also helpful, so that interventions can be put in place for those who are at increased risk for suicide. Restricting access to the means of suicide has also proven to be effective for preventing suicide.

While many interventions aim to reduce suicide risk factors, it is also important to consider and strengthen factors that increase resilience and protect against suicidal behavior. Strong personal relationships, religious/spiritual beliefs, and positive coping strategies decrease the likelihood of suicide.
The importance of community should not be underestimated either. Communities can provide support to at-risk individuals, help reduce stigma, and support those who are dealing with suicide-related grief.

By increasing awareness, reducing stigmas, and making resources available to those who need them, we can work together to prevent suicide.