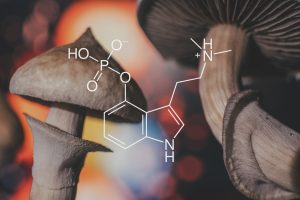 Research chemicals are commonly associated with things like ‘the dark web,’ ‘silk road,’ ‘the amazon of drugs,’ and other, slightly shady and un-salubrious sectors of society.  However, research chemicals earn their family name because there are some actual scientific researchers investigating true therapeutic and clinical potential.  Recently, one such scientific researcher, Dr. Alan Kozilowski, a trained organic chemist from the University of Berkeley and Harvard, outlined his efforts to manufacture a compound that mirrors the effects of psilocybin.

Psilocybin is a compound best know for being the ‘magic’ in the mushroom.  Kozilowski was inspired by the significant, positive research findings for psilocybin and the treatment of various conditions like addiction, depression, and anxiety.  Mushroom therapy for addiction treatment is indeed an area of growing interest. However, the cultural groupthink in modern society around well-known psychedelics continues to stifle progress towards integrating the established therapeutic value of psychedelics into mainstream clinical practice.

Research chemicals, like the compound Kozilowski is developing, often enjoy the benefit of not being classified as schedule I substance, so research and development could possibly proceed with greater efficiency and significantly less cost.  Additionally, because psilocybin and other naturally occurring psychedelic compounds cannot be patented major drug companies have no interest in their development and thus, funding for psychedelic research presents many challenges.  A compound similar to psilocybin, however, could bypass much of the red-tape bureaucracy that comes with researching schedule I substances, could make the developers truckloads of cash, and might help psychedelic treatment integrate into the mainstream much faster than current estimations for compounds like MDMA and psilocybin.

While I personally harbour significant skepticism that a human will be able to improve upon nature’s creation of psilocybin, faster integration of psychedelic treatment into the mainstream will very possibly lead to rapid and drastic improvements in the treatments for many debilitating conditions like PTSD, addiction, depression, and anxiety.  Of course, proponents for sticking to an unmodified and not updated approach to addiction treatment will undoubtedly rehash weathered clichés about cross-addiction, so-called real recovery, and other such unsubstantiated fables as psychedelics continue to make headways into mainstream treatment.  However, the overwhelming preponderance of scientific evidence to-date supports the safety profile of psychedelic compounds and the potential for significant and lasting positive effects from psychedelic treatment.