The Streets Are No Place for Addicts

The Streets Are No Place For Addicts 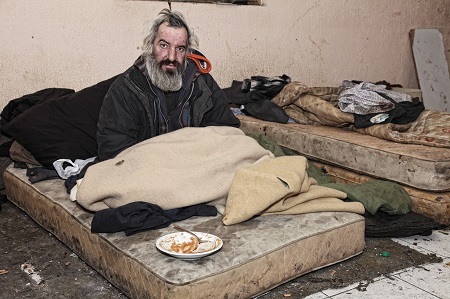 Treating trauma with trauma isn’t helpful, it’s abusive. Turning away from loved ones in need deepens isolation and disconnection. Trauma and isolation cause addiction, connection cures it. Addiction, trauma, and mental illness occur amongst people without a home at much higher rates than the general population. The solution of casting our wounded into the shadows beneath the shoddy shelters of freeway overpasses is no solution at all – it only deepens the problem. Far from a naïve pipe-dream born in a hippie-haze, the story of the Portland Hotel Society in Vancouver, Canada is a hopeful example of a tangible solution – Housing First.

As part of Vancouver’s adoption of the common sense ‘Four Pillars Approach’ to tackling problems of homelessness and addiction, The Portland Hotel opened in 1999. The Portland Hotel grew into The Portland Hotel Society (PHS), which currently operates safe injection sites and provides 1,153 rooms to people living in severe poverty. PHS has one simple rule – nobody gets kicked out. Active drug use, property destruction, psychotic episodes, criminal records, none of it threatens to take away the foundational need for shelter. As a result, the city saves money by reducing the costs of associated health problems (overdoses, ER visits, HIV infections, etc).

The most common argument against a housing first model like the PHS is cost. Even with some questionable expense management at the PHS, research shows that providing stable housing actually costs less than “caring” for people living on the streets (e.g. over 70% reduction in emergency related costs). PHS also led the way in safe injection sites, which are a major factor in reducing new HIV infections and overdose deaths. Vancouver’s common sense tactics even made a convert of its “wealthy blue-blood and conservative-minded” mayor, Philip Owen, who became a champion of sensible drug policy and a bit of local hero. Folks over at the White House at the time did not buy into common sense, however, and called Owen’s support of the PHS “state-sponsored suicide.”

In the past decade a single “research” article criticized Vancouver’s approach, saying that the vast body of empirical support exaggerated positive findings and downplayed negatives. The critical article, it turns out, was published in a journal posing as an open-access, peer-reviewed scientific journal. Furthermore, the journal that published the critical article turned out to be run by none other than the Drug Free America Foundation, and the article was funded by a $1.5 million grant from the U.S. Department of Justice. Hmm, coincidence? Doubtful. But I’m sure the U.S. motives were pure.

The homeless population in Vancouver leveled out in 2011, but has not been decreasing. Just over a thousand rooms probably isn’t enough to truly tackle the problem. Portugal (whose radical move to decriminalize drugs did not lead the country into ruin as many predicted) recently announced a 5-year housing-first strategy to tackle homelessness with a budget of 60 million euros. It will be interesting to see the results.

Einstein reminded us that we cannot solve problems with the same thinking that created them. The drug war created millions of criminal records that resulted in difficulty getting jobs and housing. Blocking people from getting jobs and housing ostracized a significant portion of our own population. Our society as a whole bought into the lie of tough love and now, like a stubborn child, we refuse to admit that we are embarrassingly wrong.

The message from the data is clear. Homelessness – and the trauma, mental illness, and substance use that go along with it – is best helped by providing homes, not jail sentences, and the homes must not be contingent on nonsense like total abstinence.  One-way bus tickets, believe it or not, don’t do much to solve the problem either. Jail sentences for possession of plant derivatives result in permanent criminal records, which create life-long barriers to gainful employment and contribute to homelessness, trauma, and addiction. Housing first is an ‘everybody wins’ solution – the only thing that stands it its way is our own refusal to admit that we’re wrong.