Why Do College Students Drink So Much? Why Does Anyone? 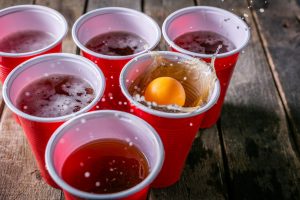 Some college students drink to excess. Such drinking is obvious to anyone who visits a college town on nights that “specials” are offered at the bars, and on other nights also. Why? Just a result of college culture? A self-fulfilling prophesy of the party crowd when they leave home? A youthful perception of invincibility? Perhaps. But how about a more mundane and controllable factor: the price of the alcohol?

In her column, “Tara Parker-Pope on Health” (Sept. 2, 2009), Parker-Pope reports that alcohol researchers from the University of Florida and San Diego State University studied how drink specials influenced the alcohol consumption of about 800 men and women leaving seven near-campus bars. Patrons were studied at different times, with drink prices varying from time to time. Alcoholism: Clinical and Experimental Research, a highly respected scientific journal, will publish the study in its November issue.

The not unsurprising findings were that cheap alcohol brings college students to bars, but also leads them to drink more. Bar owners have argued that low prices bring more students into their bars, but do not increase drinking while there. These results suggest otherwise. It would seem that bar owners do not know what is happening in their own businesses (this is hard to believe!) or they are reluctant to state accurately what they in fact know.

The main finding was that a high cost per gram of alcohol (not the whole drink, just the active ingredient: ethanol) led to less intoxication. Cheap alcohol led to heavier consumption and more intoxication. The most intoxicated individuals paid less than $2 for 14 grams of alcohol. By comparison, the average drinker from this sample paid about 2 ½ times as much ($4.44 for the same 14 grams of alcohol in their drinks). Bar patrons were 30 percent less likely to leave the bar legally drunk if the price of the drink went up $1.40.

It is reasonable to speculate that one reason college students are so sensitive to the price of alcohol is that they have limited disposable income. If you like drinking and have limited money, drink specials would be ideal, especially “all-you-can-drink for one price” specials. Presumably, price sensitivity applies to just about anyone. There is hardly a retail business anywhere that does not sometimes offer sales and specials.

If it is important enough to us to reduce college drinking (or drinking for anyone else), these findings suggest a method for accomplishing that reduction. A $1.40 increase in the price of a drink decreases the likelihood of leaving legally intoxicated by 30 percent. We could lessen excessive drinking by raising taxes and prohibiting drink specials, especially all-you-can-drink specials.

We could reduce drinking by raising prices, but should we? Even if we should, would we? We have used higher cigarette taxes to help reduce smoking. Those tax increases were easier to accomplish because smokers are now clearly in the minority in the US (about 25% of the population). Drinkers, however, are in the majority. Raising prices to lower consumption is actually well understood in the alcohol prevention community. The alcohol industry has lobbied effectively to prevent tax increases while supporting other methods (such as “education”) that do not work nearly as well.

In a free society, access to at least some intoxicants is considered a right by many people. The government manages that right by taxation and regulation. Such management is reasonably well accepted by most people. We currently have a double standard, however, when we compare the taxation and regulation of cigarettes and drinks. The double standard appears to be accepted by most, probably based on the reality that the majority drinks and only a minority smokes. It would be good if recognized the existence of this double standard, and the fact that we have at least one method for significantly reducing alcohol problems if we choose to use it.

New York Times, Tara Parker-Pope on Health, September 2, 2009, When Getting Drunk Is Cheap