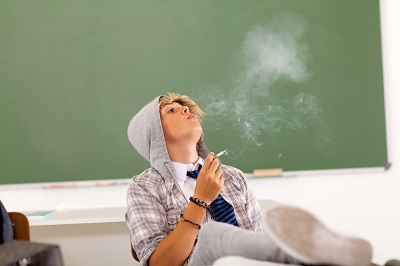 Teens and drugs go together like soap and suds.  Nearly 80% of kids try alcohol before aging out of the teen years.  Last month about a third of high school seniors in the US drank.  Over 80% of teens are offered illegal substances, and over half accept.  Teens experiment with drugs.  Rather than entertain fantasy that somehow we can eliminate all teenage substance experimentation, it is important to look honestly into the most effective ways to prevent teenage substance abuse.

To date, efforts to prevent teenage substance abuse fell flat.  The ebb and flow of a few percentage points within margins of error demarcated by pretty graphs is pretty much all we have to show for the billions of our tax dollars spent on drug prevention.  The Just Say No and D.A.R.E. campaigns didn’t end teenage substance abuse, but they did make substance use more attractive and awaken kids to possibilities.

So if attempting to scare kids and telling them that just uttering the monosyllabic, two letter word ‘No‘ don’t work in preventing teenage substance abuse, pretty much nothing will, right?  Wrong.  The most effective ways to prevent teenage substance abuse are well established but rarely implemented due to the ongoing infection of abstinence-only mores into our cultural consciousness.

The single best way to prevent teenage substance abuse is to teach, especially through modeling, self-regulated use. It bears repeating – we best prevent drug abuse by modeling responsible use. Honesty and authenticity about substances help kids make informed decisions about experimentation.  Lies and exaggerations about drugs deepen the divide between adults and teenagers.  When a kid first smokes weed, laughs to the point of tears, truly hears Dark Side of the Moon for the first time, binges on ice cream sandwich bars, then takes a nap, Dad’s story about how pot made Uncle Bob homeless is pretty easy to see through.

Viewing Teenage Drug Use Through a Different Lens

Substance experimentation amongst teenagers is developmentally appropriate.  Kidnapping a teenager who is experimenting with cannabis in the middle of the night and sending him off to a bootcamp in Mexico might be a skosh over-reactive.  Parents who overreact to teenage drug experimentation would probably benefit from getting treatment for themselves rather than sending kids off to rehabs to learn more about drug use or to bootcamps to be abused and brainwashed.  Substance use is one way for teenagers to foster a sense of separation and individuation from parents.  Parents preventing teenage efforts at individuation would do well to recall the words of Carl Jung who said, “The greatest burden on the child is the unlived life of the parent.”