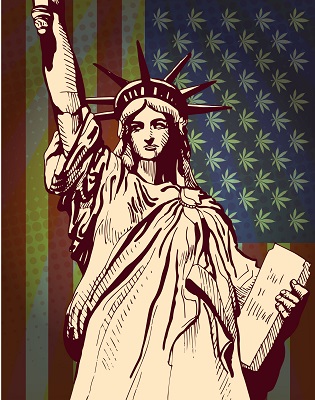 On January 4th 2018, Attorney General Jefferson Beauregard Sessions issued a memorandum to all United States Attorneys stating that the federal government’s hands-off approach to enforcing cannabis laws was “unnecessary.”  The memorandum rescinded the federal government’s hands-off approach to cannabis, effective immediately, due to “Congress’s determination that marijuana is a dangerous drug and that marijuana activity is a serious crime.”  Few crimes are more serious than cannabis activity, thus the memorandum from the AG is an important step towards restoring law and order in our increasingly chaotic society.  States with legal cannabis beware, Ol’ Jeffy and his legion of justice warriors are coming to reinstate discipline and sanity to your unabashedly irresponsible and utterly reprehensible promotion of the devil’s lettuce.

The federal crackdown on cannabis is long overdue.  In the eight states with legal, recreational cannabis society quickly deteriorated into an unrestricted swamp of moral depravity.  Opioid overdose deaths sadly decreased an average of 25% in states with medical cannabis.  Countless senior citizens and traumatized war veterans stopped taking complex cocktails of pills and instead opted for the madness of a plant medicine with fewer side effects.  Using cannabis instead of popping pills disgustingly cut into the profits of big-pharm.  States with legal cannabis tragically spent millions of dollars in cannabis tax revenue improving schools.  California anticipates about $6 billion dollars in tax revenue from cannabis in 2018.  This sociological unravelling must be stopped!

Fear not, J-Beau and his cronies are coming to the rescue.  In line with flagship conservative stances of small government and state’s rights, the federal Justice Department is swinging the swift and decisive hammer of law to smash the attempt of any state to make its own decisions about cannabis. Also consistent with the conservative agenda of promoting economic growth, aiming to eradicate legal cannabis will suffocate a source of billions of dollars of revenue and spend billions of dollars prosecuting and imprisoning non-violent criminal potheads who enjoy the satanic practice of smoking a joint in the evening.  Reducing profits and increasing expenditures is always a brilliant recipe for economic prosperity.

I want to issue a personal thank you to the forward-thinking Jefferson Beauregard and his Justice Department for spending our tax dollars on the enforcement of such a vital cause in the effort to help our country grow and prosper. It is a wonderfully refreshing thing to witness politicians staying true to their word, honoring their principles, and implementing the will of the constituents they represent. According to an October, 2017 Gallop poll, 64% of Americans are in favor of legal cannabis, which clearly shows that J-Beau and his comrades are faithfully representing the will of the people in their righteous pursuit of the depraved stoners.

As we watched Washington state, Oregon, and Colorado tailspin into anarchy in the few years since legalizing cannabis, the stage was set for a brave hero to rise and restore order and sanity.  After Massachusetts, Maine, Alaska, Nevada, and California jumped onboard Lucifer’s cannabis coach of character corrosion our country was cast into a crossroads of virtue and turpitude.  Fret not my fellow champions of narrow consciousness, J-Beau and his squadron of squares are on the move and if all goes well, a significant reduction in free-thinking lies just ahead.