The Relationship Between Addiction and Habit 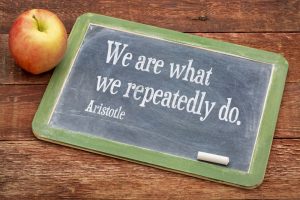 Let’s start with some examples of what appears to be an addiction. A college freshman ends up in the emergency room after his first binge but is not repeatedly involved with alcohol (although he may soon be). A medical patient on opiates for pain control does not crave the next injection for the “high,” but simply wants pain relief. A low stakes poker player has minor losses, but the pleasure of gambling in this manner, for this individual, outweighs the cost. This last example illustrates how addiction is highly dependent of the context in which it occurs. What is a minor expense for one individual might not be for another.

Addiction as a Disease

Let’s also consider the definition of addiction as a disease. The “three C’s” of this definition are craving, consequences, and (loss of) control. Although widely used, the craving and control aspects of this definition are inaccurate.  The disease definition is all-or-none. You either are an addict/alcoholic or not. In fact, there are many aspects of addiction and you could be high, medium, or low on any of them. There is no clear dividing line where addiction begins.  Secondly, craving is understood as uncontrollable. However, with practice craving is fully controllable. Otherwise, addiction is a hopeless situation–but it’s not!

Fortunately, everyone agrees about the negative consequences of addictive behavior. The reason to change addictive behavior is that it’s bad for you! Although you may enjoy getting high, the rest of your life is falling apart.

Consider toothbrushing. If you brush regularly (and I hope you do!), but miss one a brushing, do you begin to crave the opportunity to brush? I do, and I believe many others do. The craving is not strong, but there is a sense of having missed something. As severe addictions develop, positive addictions drop out of the individual’s life (including tooth brushing!), and the restoration of these behaviors (and the development of new ones) is a crucial aspect of overcoming the addiction.

Addiction and Habit In Daily Life

Using our definition as a guide, we can say that there is a continuum of repetitive behaviors. At one end lies harmful addiction (costs exceeding benefits), at the other lies positive addiction (benefits exceeding costs). In the middle is a plain habit. All involve craving to some degree. We might also describe the continuum as consisting of bad habits, plain habits, and good habits.

The same repeated behavior could be a positive addiction, a harmful one, or a habit. Exercise or wine-drinking are two common examples. Cocaine use is another example if we consider the coca-leaf chewing of millions of South Americans, which is akin to coffee drinking. Possibly any addictive involvement that lies at the severe end of the continuum, for some individuals, could also be found at the other end, in other individuals (although the behaviors associated with these involvements would be dramatically different).

Some involvements may in practice tend toward only one end of the continuum (e.g., toothbrushing), but what happens normally can also happen in unusual circumstances or contexts. The cost-benefit analysis of any behavior is dependent on its frequency, intensity, context, and other factors. Before we labeled something a bad habit, plain habit, or good habit we would need to understand something about the individual’s entire life.